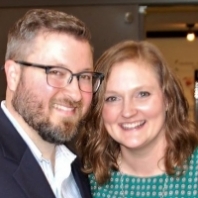 Pastor Jason is originally from Columbus, and is a graduate of both Cedarville University and Mid-America Baptist Theological Seminary. He has over 10 years ministry experience including time as a worship leader, a missions pastor and a church planter, and has pastored churches in Tennessee and Ohio. He is married to Brandy; they have three children, Stella and Ben, as well as a daughter in heaven named Josie. Jason is passionate about preaching the Word of God and making disciples, and is excited about what God has planned for the future of Erieside.